Used at Leading Companies Around the World...

The top companies of virtually every major industry have used Frontline Solvers either inside Excel or in an application outside Excel using our SDK: 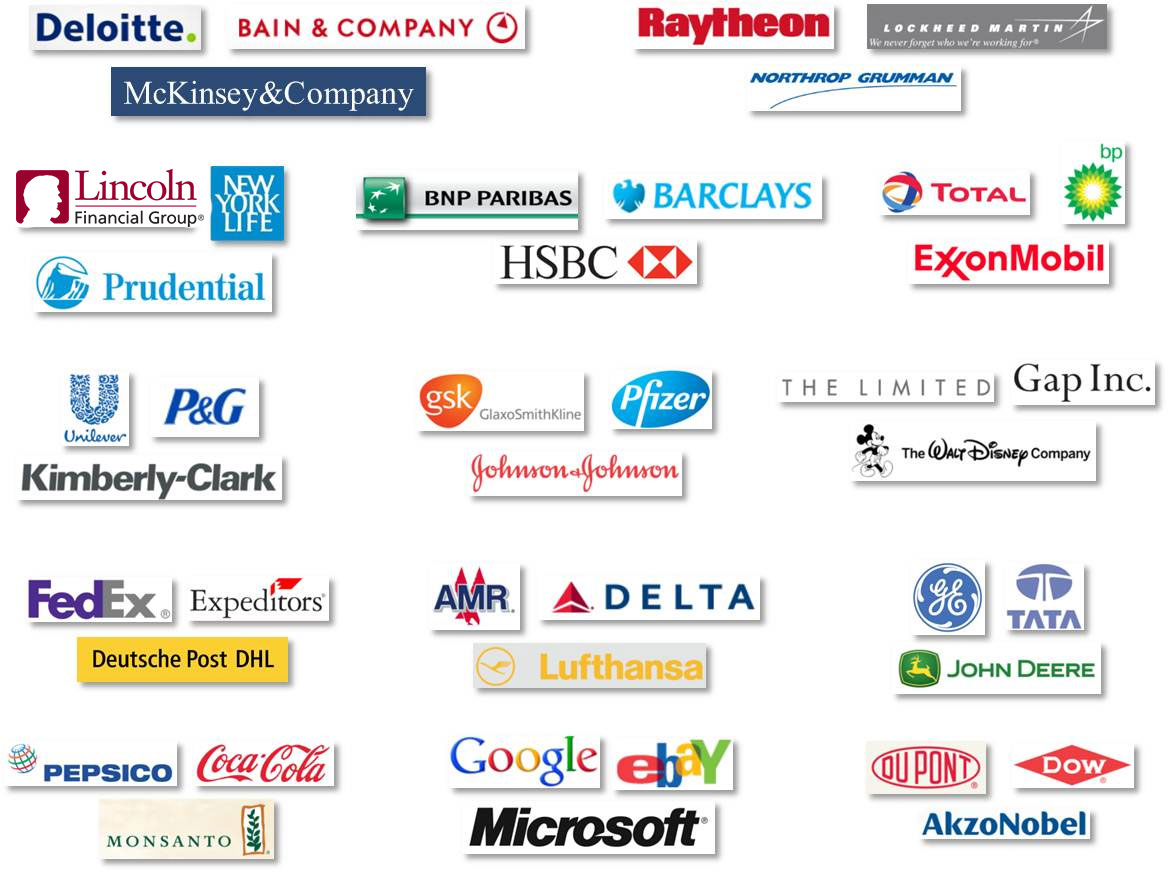 Along with more than 8,000 other successful companies.

The number one choice to teach around the world...

More top educational organizations teach optimization and simulation with, and more students learn with, Frontline Solvers than any other competing alternative including: 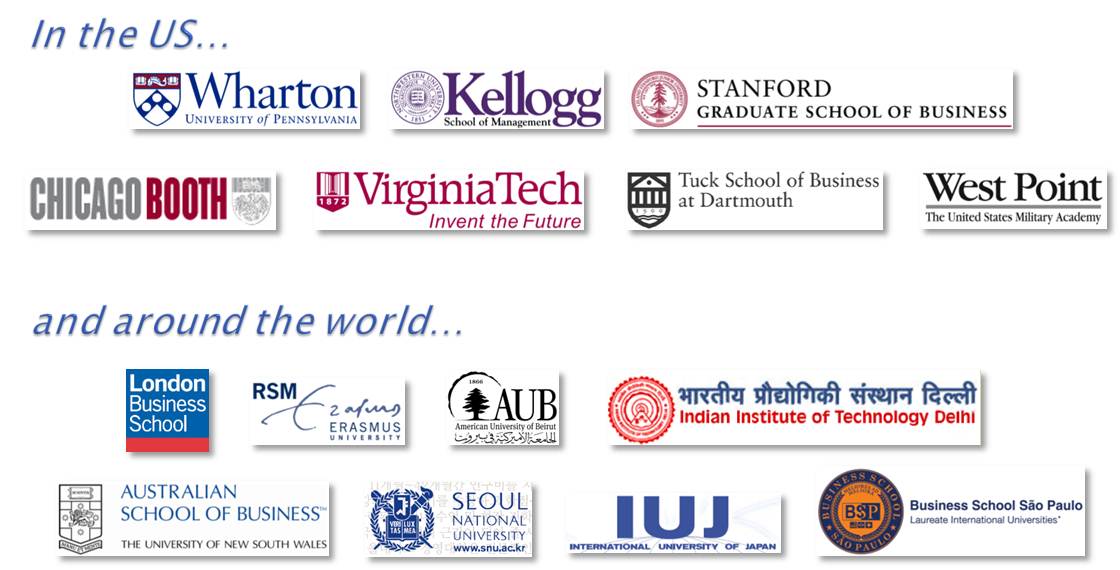 Plus hundreds of other programs around the world. No one else comes close.

We invite every new customer to participate in a short survey that includes the "Net Promoter" question, made popular among customer-centric companies by the famous book The Ultimate Question.  Here's what they say: Here are just a few stories from our over 8,000 corporate and university users.

“The Premium Solver Platform with Xpress Solver engine has been a huge asset to us.  We have been able to utilize the solver’s capability to run extremely complex models of our distribution network uncovering large savings; our first project uncovered nearly $1MM in savings.”

The package seemed to go way beyond my wildest dreams.

“...Then I discovered Solver and all the stuff I had done before after months of programming and sweat was there at my fingertips. The packages seemed to go way beyond my wildest dreams. And all the other little extra bits were there as well at the click of a button - non-negative and integer coefficients, constraints, and some other bits I have yet to use. And the thing just works! ...

So now in my daily work I might propose a model for the change of the dry matter or the color of firmness of kiwifruit over time and use Solver to fit it to a large data set. The models typically involve 10 to 20 parameters many of which are the same for all sets of fruit but some are set-specific. For example the time of reaching maturity may vary from orchard to orchard of course so that one may need to have a different value for each orchard. But with the tools of Excel available that is easy. ... So do I use Solver? Absolutely! Do I like it? I Love it! Could I do my job without it? No way! Indirectly the New Zealand kiwifruit industry has benefited immensely form Solver. So have I!”

The number of variables and constraints became so large that a standard solver would not suffice – no problem, however, for the Premium Solver.

“Having learned to use Premium Solver during my MBA back in 2003 on a more theoretical level, I was a little disappointed of not having real-life opportunities in my job initially after the MBA. It was in 2010 when I started to work at the Institute of Green Technology & Rural Development [i.green]. In my very first project, Premium Solver was the central tool to do research.

The project analyzes the shifts of income in the agricultural sector of the state of North-Rhine Westphalia through the implementation of the Renewable Energies Sources Act. We set up a typical farm model with resources and constraints, namely arable land, animal population, crop cultivation, work force availability, market prices for feed and farming products etc. and included the regulatory framework of the Renewable Energies Sources Act. The number of variables and constraints became so large that a standard solver would not suffice – no problem, however, for the Premium Solver. We could calculate which direction of production a farmer would choose given the current regulatory framework, and, more importantly, which parameters influenced his decisions the most.

The results will be used to assist policy makers to amend the mentioned law, as this planned on a regulatory 3-year basis, to avoid false developments on the way towards a 100% renewable energy supply In Germany.”

It was also very easy to integrate with Excel.

“The Frontline Premium Solver was very helpful in solving a large water reuse optimization problem for one of our manufacturing plant. It was also very easy to integrate with Excel.”

This would have cost me double the time if I would have done it in the classical way.

“What I very much like about your Solver product is that, without being an expert on Solver, even worse, while only being a beginner, I can apply it so many times in my daily life (I am a professor of Chemical Engineering), that it saves me a significant amount of time. For example, last weekend I solved eight problems on Chemical Reaction Engineering and for six of them I used Solver. This would have cost me double the time if I would have done it in the classical way. I use Solver mainly for curve fitting (any type of model), roots finding for simultaneous equations, maximizing functions.”

The result is a truly impressive product.

A few comments from our recent customer study.

“Even as an experienced LP user, my inclination now is to use Solver first as opposed to the mainstream platforms like PIMMS, etc."

"My colleagues who perform optimization routines appreciate how fast the process runs relative to @Risk.”

“I like the tool, it makes my job easier. I've always been able to get technical support within 3 days. They have provided me with model building assistance which in my opinion is above and beyond just providing a product.”

“Solver with excel is much, much, quicker to program than writing code in MATLAB or C, both of which I'm quite fluent in, having written many thousands of lines of code used daily by hundreds of colleagues.”

“We've found Solver to be not only a powerful tool, but also very easy to use, which is critical in the business tool we are creating [as it] will be run by people unfamiliar with linear programming.”

“The Solver worked very well. I wouldn't have been able to complete my masters degree field project without it.”

“I get to share w/ hundreds of people that they can save a lot of time and money by letting solver give them an ideal, trustworthy solution for problems that take others tremendous amounts of time to guess at on their own.”

“Your product made it easy for me to use MS Excel to perform the analysis and get the results I needed quickly and easily. It's interface with the MS 2007 Office ribbon was especially nice and the user manual was actually helpful in solving real problems!”

“The biggest benefit is cost savings for the organization. For me, the largest benefit is the ease of use and the ability to run multiple models very quickly.”

“It's a good product and we used it to calculate projections for the ongoing elections. Everyone was satisfied with the results.”