This example illustrates the use of XLMiner's k-Nearest Neighbors Prediction method. On the XLMiner ribbon, from the Applying Your Model tab, select Help - Examples, then Forecasting/Data Mining Examples to open the Boston_Housing.xlsx example data set. This data set contains 14 variables described in the table below. The dependent variable MEDV is the median value of a dwelling. The objective of this example is to predict the value of this variable.

A portion of the data set is shown below. The last variable, CAT. MEDV, is a discrete classification of the MEDV variable, and will not be used in this example.

On the XLMiner ribbon, from the Data Mining tab, select Partition - Standard Partition to open the Standard Data Partition dialog. 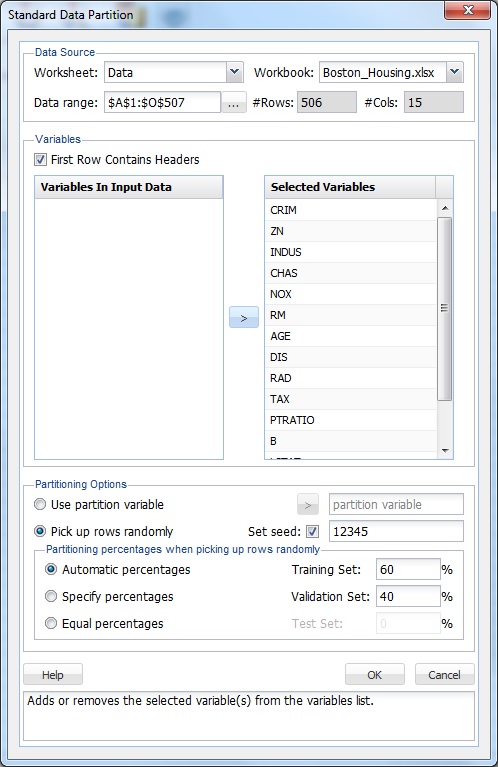 Select a cell on the Data_Partition worksheet. 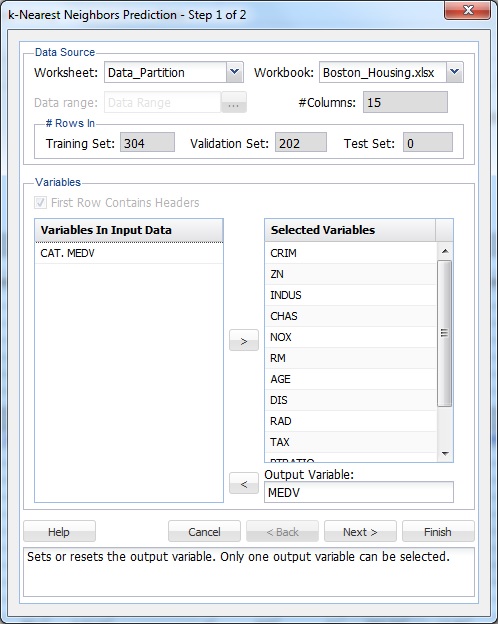 At Output Variable, select MEDV, and from the Selected Variables list, select the remaining variables (except CAT. MEDV).

Click Next to advance to the Step 2 of 2 dialog. 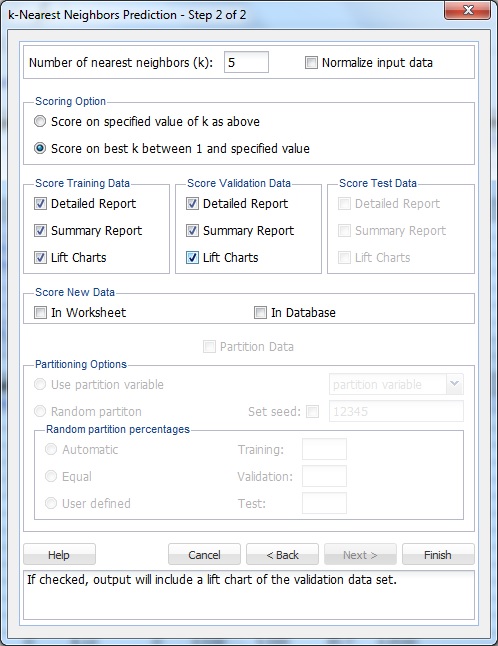 Select Normalize Input data. When this option is selected, the input data is normalized, which means that all data is expressed in terms of standard deviations. This option is available to ensure that the distance measure is not dominated by variables with a large scale.

XLMiner V2015 provides the ability to partition a data set from within a classification or prediction method by selecting Partitioning Options on the Step 2 of 3 dialog. If this option is selected, XLMiner partitions data set immediately before running the prediction method. If partitioning has already occurred on the data set, this option is disabled. For more information on partitioning, see the Data Mining Partition section.

Click Finish. Worksheets containing the output of the method are inserted to the right of the Data_Partition worksheet. The KNNP_Output worksheet contains the Output Navigator, which allows easy access to all portions of the output. 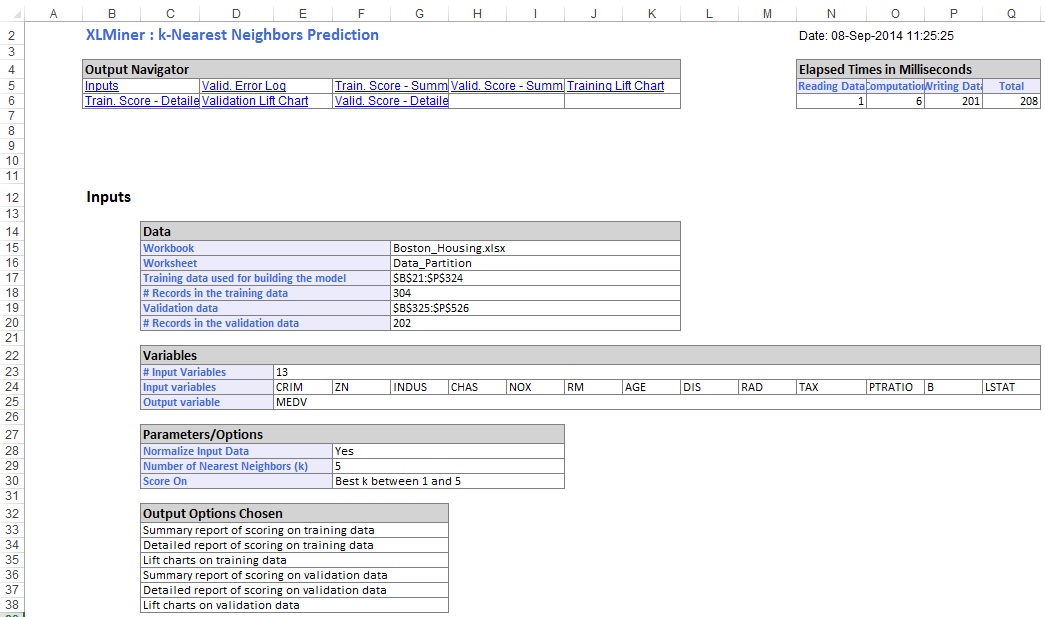 Scroll down the KNNP_Output worksheet to the Validation error log for different k (shown below). As per our specifications, XLMiner has calculated the RMS error for all values of k, and denoted the value of k with the smallest RMS Error.

Scroll down the page to view the Summary Report. This report summarizes the prediction error. The first number, the total sum of squared errors, is the sum of the squared deviations (residuals) between the predicted and actual values. The second is the square root of the average of the squared residuals. The third is the average deviation. All these values are calculated for the best k (k=4). 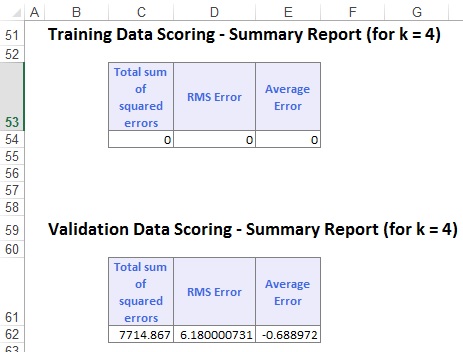 On the Output Navigator, select the Valid. Score - Detailed Rpt. to display the Prediction of Validation Data table. For each record, this table displays the predicted value, the actual value, and the difference between them (the residuals).

Lift Charts and RROC Curves are visual aids for measuring model performance. Lift Charts consist of a lift curve and a baseline. The greater the area between the lift curve and the baseline, the better the model. RROC (regression receiver operating characteristic) curves plot the performance of regressors by graphing over-estimations (or predicted values that are too high) versus underestimations (or predicted values that are too low.) The closer the curve is to the top-left corner of the graph (the smaller the area above the curve), the better the performance of the model.

In an RROC curve, we can compare the performance of a regressor with that of a random guess (red line) for which under-estimations are equal to over-estimations shifted to the minimum under estimate. Anything to the left of this line signifies a better prediction and anything to the right signifies a worse prediction. The best possible prediction performance would be denoted by a point at the top left of the graph at the intersection of the x and y axis. This point is sometimes referred to as the perfect classification. Area Over the Curve (AOC) is the space in the graph that appears above the ROC curve and is calculated using the formula: sigma2 * n2/2 where n is the number of records The smaller the AOC, the better the performance of the model. In this example we see that the area above the curve in the Training Set is 0, which indicates a perfect classification or zero misclassification errors. The AOC for the Validation Set is a bit high, which means the model may be overfit to the training data. 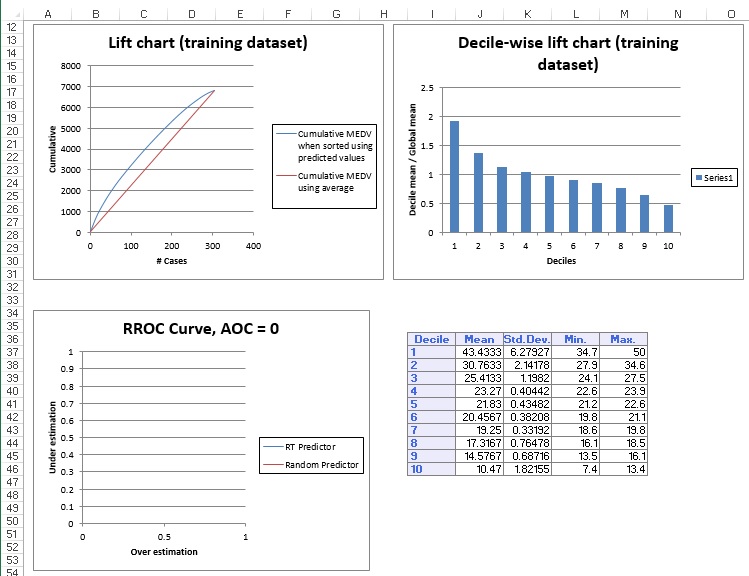 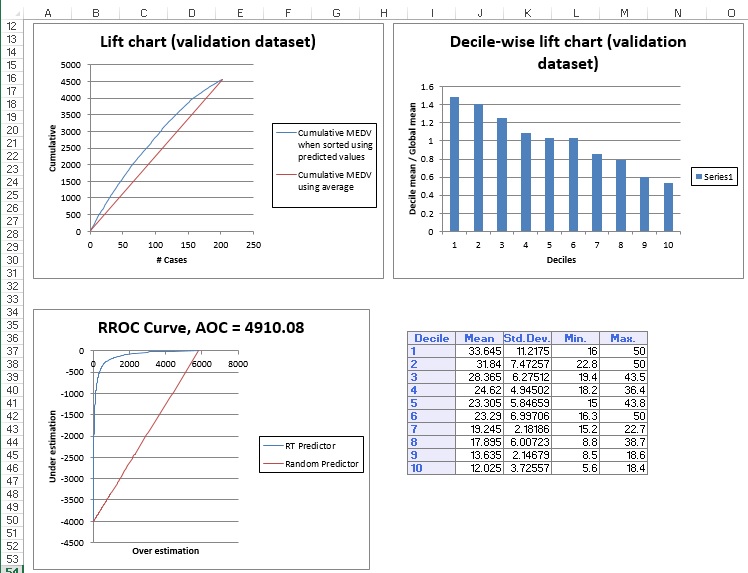 For information on the KNNP_Stored worksheet, see the Scoring New Data section.