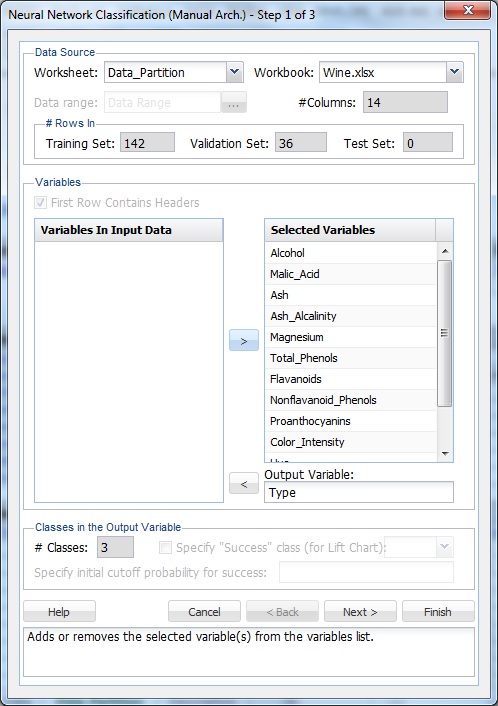 Click Next to advance to the Step 2 of 3 dialog. 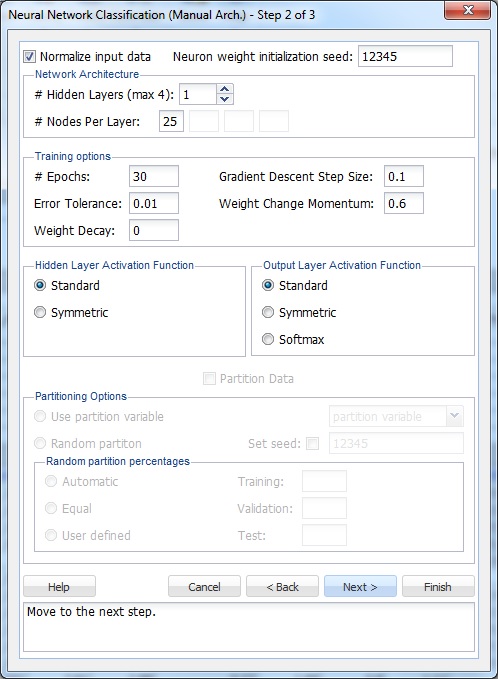 The option Normalize input data is selected by default. Normalizing the data (subtracting the mean and dividing by the standard deviation) is important to ensure that the distance measure accords equal weight to each variable -- without normalization, the variable with the largest scale would dominate the measure.

At # Epochs, keep the default setting of 30. An epoch is one sweep through all records in the Training Set.

For Gradient Descent Step Size, keep the default setting of 0.1. This is the multiplying factor for the error correction during backpropagation; it is roughly equivalent to the learning rate for the neural network. A low value produces slow learning, a high value produces rapid (erratic) learning. Values for the step size typically range from 0.1 to 0.9.

For Weight Change Momentum, keep the default setting of 0.6. In each new round of error correction, some memory of the prior correction is retained so that an outlier does not spoil accumulated learning.

For Error tolerance, keep the default setting of 0.01. The error in a particular iteration is backpropagated only if it is greater than the error tolerance. Typically, error tolerance is a small value in the range from 0 to 1.

For Weight Decay, keep the default setting of 0. To prevent over-fitting of the network on the Training Set, select a weight decay to penalize the weight in each iteration. Each calculated weight will be multiplied by 1-decay.

Nodes in the hidden layer receive input from the input layer. The output of the hidden nodes is a weighted sum of the input values. This weighted sum is computed with weights that are initially set at random values. As the network learns, these weights are adjusted. This weighted sum is used to compute the hidden node's output using a transfer function, or activation function. Select Standard (default) to use a logistic function for the transfer function with a range of 0 and 1. This function has a squashing effect on very small or very large values, but is almost linear in the range where the value of the function is between 0.1 and 0.9. Select Symmetric to use the tanh (tangent) function for the transfer function, the range being -1 to 1. If more than one hidden layer exists, this function is used for all layers. Keep the default selection as Standard.

XLMiner V2015 provides the ability to partition a data set from within a classification or prediction method by selecting Partitioning Options on the Step 2 of 3 dialog. If this option is selected, XLMiner partitions data set immediately before running the prediction method. If partitioning has already occurred on the data set, this option is disabled. For more information on partitioning, see the Data Mining Partition section.

Click Next to advance to the Step 3 of 3 dialog. 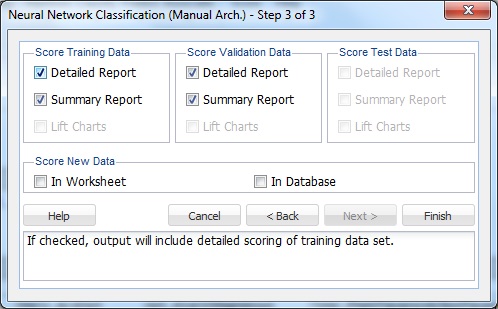 Click the NNC_Output worksheet to view the Output Navigator. 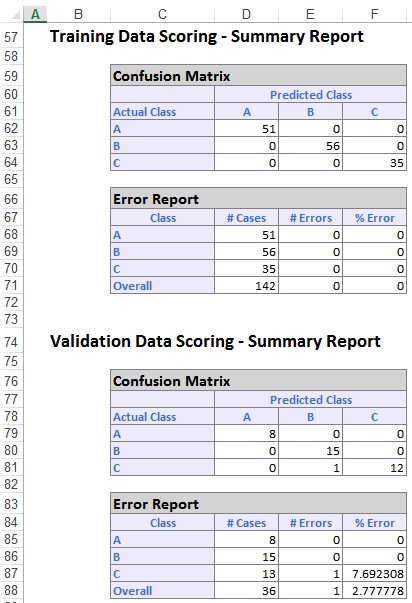 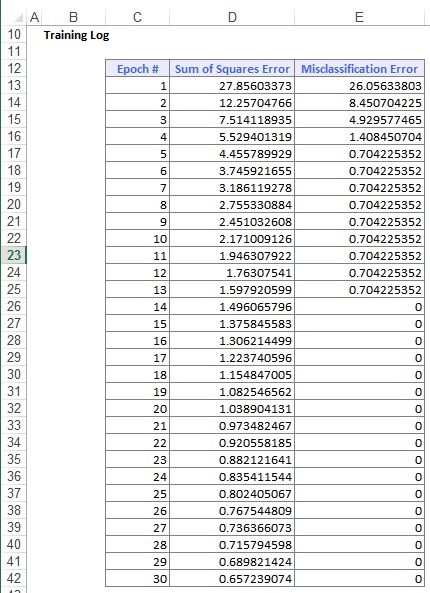 XLMiner provides intermediate information produced during the last pass through the network. Scroll down on the NNC_Output worksheet to the Inter-Layer Connection Weights table.

Click the NNC_TrainingScore worksheet tab to view the classifications assigned to each record in the Training Set. The class with the largest assigned probability becomes the assigned class. Here you can compare the Predicted Class with the Actual Class. Highlighted records indicate the record was misclassified.

Click the NNC_ValidationScore worksheet tab to view the classifications assigned to each record in the Validation Set. Again, the class with the largest assigned probability becomes the assigned class.

With this particular data set, we have seen that the best fit to the data came from the ensemble methods.